"Light me another Cuban" 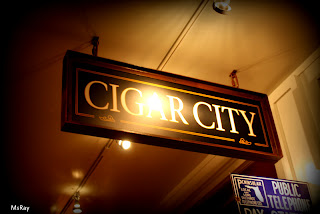 Cigar stores are everywhere here in Florida especially that we have a huge Latin and Hispanic population.  On my recent visit to Orlando, I was able to make a quick visit to Ybor, a historic city built by cigar manufacturers in the mid 1880's and which housed the largest cigar factory in the world during that era.

Cuba, the Dominican Republic, Nicaragua, Brazil, Philippines, Mexico and the eastern part of the U.S. are known for their cigar industry, with the first two countries considered as the leaders.   Today, when we talk about  top rated cigars, what comes to mind are premium cigars: full-flavored with distinct and rich aroma.  That must have been what Groucho Marx had in mind when he said, "Given a choice between a woman and a cigar, I will always choose the cigar."
Posted by MsRay

Email ThisBlogThis!Share to TwitterShare to FacebookShare to Pinterest
Labels: Cigar