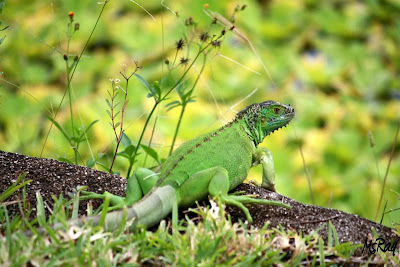 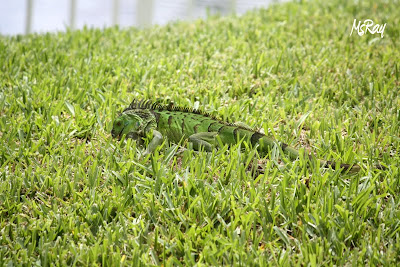 The term "feral" is used to describe animals that used to belong to someone as pets or livestock, but now live on their own as wild animals.
Feral iguanas are common in some parts of southern Florida. These wild green iguanas in Florida are a mixture of former pets and the offsprings of these animals. Because of their tropical nature, pet green iguanas that have escaped or have been released by irresponsible owners have thrived in southern Florida, and their population is growing rapidly in some areas. While some people find wild green iguanas to be a beautiful addition to the Florida ecosystem, not only may they have harmful ecological impact, they are also becoming a serious nuisance species in some areas.
Source: Green Iguana Society
Posted by MsRay

What a cool looking iguana. It could almost blend in with the green grass.

wow! what a cool little friend

nice photo of iguana ^_^ thanks for the info ms.ray.

Very educational post about feral iguanas. They look cute and tame. It is a pity that some of them have been abandoned by their former pet owners. I hope they do not become a nuisance in the environment of Florida. Thanks for the post. God bless you always.