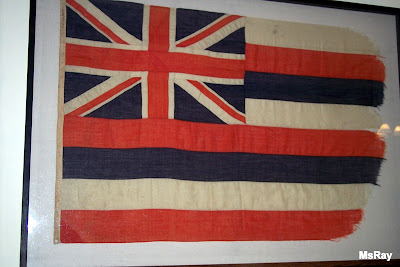 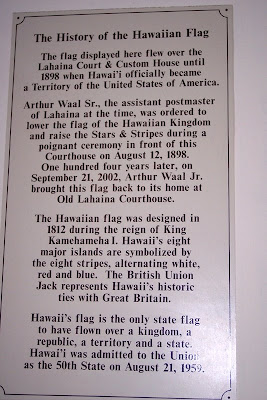 photohunt
The Hawaiian flag displayed here flew over the Lahaina Court and Custom House until 1898 when Hawaii officially became a US territory.
Arthur Waal Sr., the assistant postmaster of Lahaina at the time, was ordered to lower the flag of the Hawaiian Kingdom and raise the Stars and Stripes during a poignant ceremony in front of the Courthouse on August 12, 1898.
104 years later, on September 21, 2002, Arthur Waal Jr. brought this flag to its home at Old Lahaina Courthouse.
The Hawaiian flag was designed in 1812 during the reign of King Kamehameha I. Hawaii's eight major islands are symbolized by the 8 stripes, alternating white, red and blue. The British Union Jack represents Hawaii's historic ties with Great Britain.
Hawaii's flag is the only state flag to have flown over a kingdom, a republic, a territory and a state. Hawaii was admitted to the Union as the 50th state on August 21, 1959.
PhotoHunt
Posted by MsRay

Great post for this week - have a good weekend!

This is the first time I see the Haiwaiian flag.

Nice take of the theme and thanks for the info!

first time i've seen a hawaiian flag and i initially thought it's british flag. anyway, thanks for the informative post. my PH is up too.

So I wasn't the only one who thought it's the British Flag too....

Great photo for the entry! Thanks for the valuable info, too.

Great shot and wonderful history lesson. Thanks for sharing.

Good post for this week, love the history on it.
My post is up, come on by..

I love the history behind the flag... great shot. My flags are here.

Great choice for the theme. Thanks for sharing.