Land of Bondage, Land of the Free 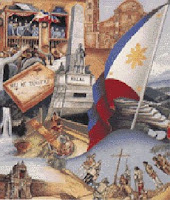 Written by Filipino statesman, the late Raul S. Manglapus, "Land of Bondage, Land of the Free" is my all-time favorite literary piece.  It talks about the Filipino's quest for freedom against oppression.

Once upon a time, the tao owned a piece of land.  It was all he owned.  But he cherished it, for it gave him three things, having which, he was content: life, first of all; and liberty, and happiness.
Then one day the Spaniard came and commanded him to pay tribute to the crown of Spain.  The tao paid tribute.  And he was silent - he was certain that he was still the master of his land.
The Spaniard became rich.  But with riches, evil entered into him and he came to the tao a second time.  He read to the tao a formidable saying, "According to this decreto real, which unfortunately you cannot read, this that you have been paying me is not tribute but rent, for the land is not yours but mine."  The tao paid tribute and said nothing.  He ceased to be a freeman.  He became a serf.  Still the tao held his peace.  The rent went up and up.  The tao starved.
And this time at last he spoke.  Not in words, but with that rustic instrument with which he cleared the land once his own - the bolo.  He transformed it from an instrument of tillage to an instrument of death, and with it drove away the stranger.  Then he returned to his field saying, "Now indeed shall I again be master of this land, once my own, but stolen from me by the trickery of quicker wits than mine."
But the tao was wrong.  For the land had another master.  This time not a stranger, but his own countryman grown rich.  The tao had a new name, kasama, which to us means partner, but which to the tao meant still a slave, for once more he suffered from his countrymen the same things he had suffered from the stranger:  the rents, the usury, and all the rest of it.
Yes, the tao returned to his field thinking that he was free.  But he soon discovered that he was still a prisoner.  His prison, a two-room shack, rent by every wind, without any comforts, except three families have there the privilege to starve.  The tao's home has become his very prison.  Its doors, if you can call them such, are wide open.  It is a prison nonetheless.  For the tao is bound to it, not with chains of steel, but with a stronger chain - his honor.  To this day, the tao remains a slave, a prisoner of the usurer.
No wonder then that tao, being a slave, has acquired the habits of a slave.  No wonder that after three centuries in chains, without freedom, without hope, he should lose the erect and fearless posture of the freeman; and became bent, misshapen, indolent, vicious, pitiful thing that he is!  Who dares accuse him, who dares rise up in judgment against this man, reduced to this sub-human level by three centuries of oppression.  The tao does not come here tonight to be judged - but to judge!  Hear then his accusation and his sentence:
I indict the Spanish encomendero for inventing taxes impossible to bear.
I indict the usurer for saddling me with debts impossible to pay.
I indict the irresponsible radical leaders who undermine, with insidious eloquence, the confidence of my kind in our government.
You accuse me of not supporting my family.  Free me from bondage, and I shall prove you false.
You accuse me of ignorance.  But I am ignorant because my master finds it profitable to keep me ignorant.  Free me from bondage, and I shall prove you false.
You accuse me of indolence.  But I am indolent not because I have no will, but because I have no hope.  Why should I labor, if all the fruits of my labor go to pay an unpayable debt.  Free me from bondage, and I shall prove you false.
Give me land.  Land to own.  Land unbeholden to any tyrant.  Land that will be free.  Give me land for I am starving.  Give me land that my children may not die.  Sell it to me, sell it to me at a fair price, as one freeman sells to another and not as a usurer sells to a slave.  I am poor, but I will pay it!  I will work, work until I fall from weariness for my privilege, for my inalienable right to be free!
BUT IF YOU WILL NOT GRANT ME THIS.. If you will not grant me this last request, this ultimate demand, then build a wall around your home.  Build it high!  Build it strong!  Place a sentry on every parapet!  For I who have been silent these three hundred years, will come in the night when you are feasting, with my cry and my bolo at your door.  And may God have mercy on your soul!
Posted by MsRay

I enjoyed your site. I am an American Expat living in Davao, Philippines. I enjoy reading blogs from other expats and especially written by Filinos or Expats in the Philippines.
I hope you will look at my blog to see an expats view living in your native country.

My grandpa wrote that speech :)
Do you mind if I link you?

hi..
great site..
just want to ask if there's filipino translation for this ?
thanks..
hav a nice day..