The Rolls Royce of Watches 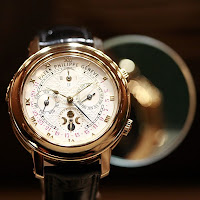 I am not a jewelry person.  In fact, I do not wear one.  I admire gazing at a beautiful piece of jewelry made with precious stones, but because I cannot afford to buy one for myself,  I never  developed any fascination for it. The very few pieces that I have which are of value are mostly inherited from my late grandmother.  The only accessory I used to wear was a timepiece, and only for practical reasons.  Since coming to the US, I stopped wearing a watch, relying on my mobile phone for the time.
Talking about timepieces, Swiss watches have always been known for its quality.  Geneva, Switzerland has long been home to the finest watchmakers in the world.
Patek Philippe stands out as the only Geneva watch manufacturer to receive the Geneva Seal, the highest official quality distinction in the watch-making industry.  The name is synonymous to quality and reliability in the world of timepieces.
A respected name in the watch manufacturing industry, Patek Philippe made their first wristwatch in 1868.  They also pioneered the perpetual calendar, split-seconds hand, chronograph and minute repeater in watches.  It mostly produces mechanical movements of the automatic and manual wind variety, but has also produced quartz watches and even the digital wrist watch.
Among the one hundred most expensive watches sold at an auction, eighty were Patek Philippe watches.   In 1999, the most expensive timepiece ever sold was a Patek Philippe watch priced at $11,000,000.00.  Likewise, in 2008, Patek Philippe's tourbillion wristmatch made world record as the most expensive modern wristwatch sold at Hong Kong Sotheby's for $1.49 million.
Posted by MsRay

similar to this web page your site is individual of my new favs.I like this website shown in addition to it has given me several sort of inspiration to have success for certain reason, so thanks.
Automatic Watch Winders