The Resting Place of the People's King 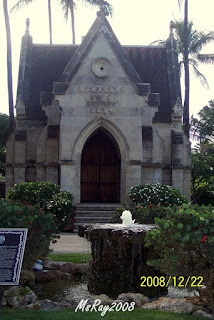 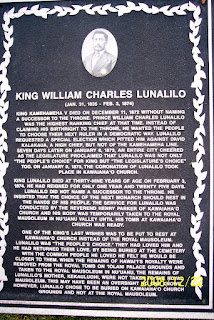 Lunalilo I, born William Charles Lunalilo, was king of the Kingdom of Hawai'i from 1873 -1874.
He was the most liberal king in Hawai'ian history.  King Kamehameha V, the last monarch of the House of Kamehameha died without naming a successor to the throne.  Under the Constitution, if the King did not appoint a successor, a new king would be elected by the legislature from the native Ali'i (Hawai'an noble rank).  Several chiefs named David Kalakaua but Lunalilo was the more popular of the two candidates.  Another contender was Ruth Keelikolani, who was a half sister to King Kamehameha V.  She was a favorite among the chiefs because she adhered to the old Hawai'ian ways.  She refused to speak English eventhough she was fluent in it.  Her genealogy was, however, too controversial and few considered her suitable to the throne.  This left only two:  Kalakaua and Lunalilo, and the latter was more popular.
Lunalilo, however, insisted that the constitution be followed.  He also wanted reform in the Hawai'ian government and amend the constitution to make the government more democratic and give people a greater part in the government.
It was, therefore, decided that a popular election be held to give people a chance to have their voices heard.  However, because the constitution gave the legislature the power to decide who would be the next king, the popular election would be unofficial.
The election was held where Lunalilo won by an overwhelming majority.  The week after, the legislature unanimously voted Lunalilo king.  It was speculated that the reason for the unanimous vote was because each legislator was 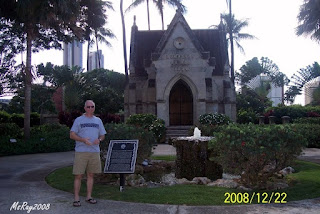 required to sign his name on the back of his ballot, and the legislators were afraid to go against the wishes of the people.  Queen Emma later wrote that hundreds of Hawai'ians were ready to tear to pieces anyone who opposed Lunalilo.
Lunalilo's popularity, and the fact that he became king through a democratic process, earned him the name "The People's King".  During his reign, a mutiny took place in the small Hawai'ian army.  Some members revolted against the drillmaster and the adjutant general.  Lunalilo was able to persuade those who revolted to lay down their arms.  After this, he disbanded the army and Hawai'i had no armed forces until  his successor restored them.
Lunalilo reigned  only for one year and 25 days.  He died of tuberculosis at the age of 39.  On his deathbed, he requested that he be "entombed among my epople, rather than the kings and chiefs" at the Royal Mausoleum.  Thus, in 1875, he was taken from the Mausoleum to the church.  During the procession, eyewitness reports stated that a sudden storm arose, and that 21-rapid thunderclaps echoed across Honolulu, which came to be known as the "21 gun salute".
Posted by MsRay