JouRney to the Diamond Head Summit 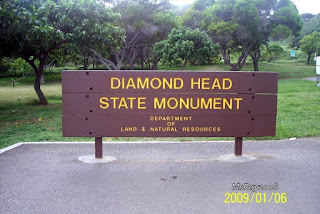 How the Crater was Formed 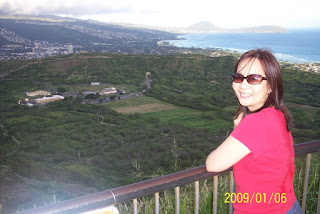 The pronounced seaward summit, deeply eroded ridges, and ovoid-shaped crater are evidence of Le'ahi's very dynamic geological history.  The creation of Oahu began with  volcanic eruptions from 2 shield volcanoes.  A period of extensive erosion followed, leaving the Ko'olau and Wai'anae  Mountain Ranges as the remnants of these volcanoes.
After many years of volcanic inactivity, the southeastern end of Ko'olau Range erupted.  These eruptions occurred under the ocean, where the magma was broken  down into ash and fine particles by the water and steam.  Blown into the air, these particles were cemented together into a rock called tuff which created tuff cones, such as Le'ahi.
Le'ahi was believed to have been formed during a single, brief eruption.  The broad crater covers 350 acres with its width being greater than its height.  The southwestern rim is highest because winds were blowing ash in this direction during the eruption.  Since the eruption, the slopes of the crater have been eroded and weathered by rain, wind, and the pounding of the sea.  A coral reef now protects the seaward slopes of the crater.
Today, Le'ahi (Diamond Head) is the most recognized landmark in Hawaii.  It was designated a National Natural Landmark in 1968 as an excellent example of a tuff cone. 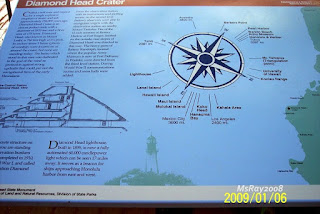 Historic Trail to the Summit
The trail to the summit of Le'ahi was built in 1908 as part of the US Army Coastal Artillery defense system.  Entering the crater from Fort Ruger, through the Kapahulu Tunnel, the trail scaled the steep interior western slopes of the crater to the summit.  The dirt trail with numerous switchbacks was designed for mule and foot traffic.  Other materials were hoisted from the crater floor by a winch and cable to a midway point along the trail.  The Kahala Tunnel was built in the 1940's and is the public entrance today.
Hiking the Trail 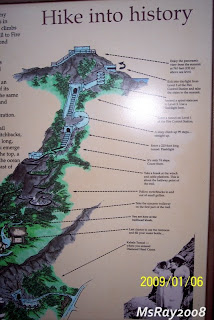 From the trailhead to the summit of Diamond Head Crater, you will hike 0.8 mile (1.3 km) one way and climb 560 feet (1.3 km) from the crater floor.  The trail follows an uneven and steep terrain requiring caution and appropriate footwear.  Portions of the trail involve steep stairways.  Other portions of the trail go through a long tunnel which is lighted.
Some Points of  Interest Along the Trail
*The trailhead at the parking lot is located on the crater floor at an elevation of about 200 feet. 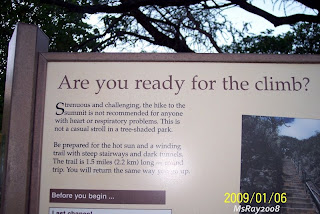 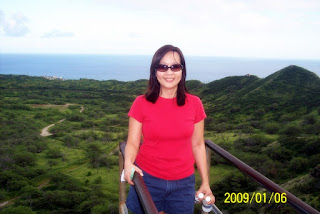 *Steep stairway of 74 concrete steps leading into the first tunnel.

*Second stairway consisting of 99 steep steps.  The cross-beams above the stairway supported camouflaging. 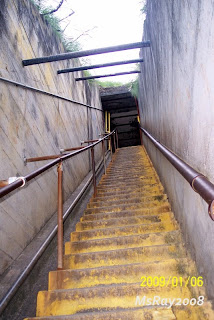 *Lighted spiral staircase accesses the 4 levels of the Fire Control Station.  Go up the 52 stairs to the third level where the mounts for the observation equipment are still present. 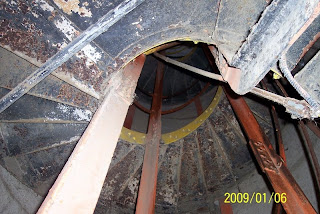 *The summit of the crater and the uppermost level of the Fire Control Station are at an elevation of 761 feet.  Bunkers along the crater rim were built in 1915.  One can see the Waikiki skyline from the summit. 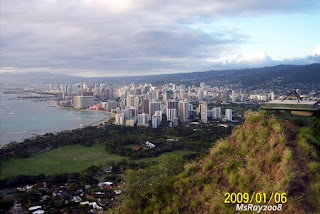 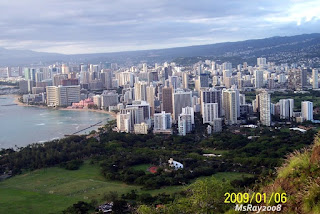 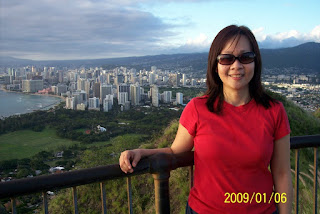 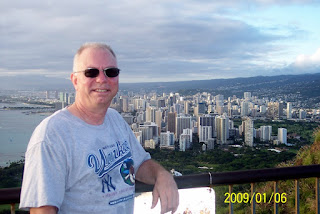