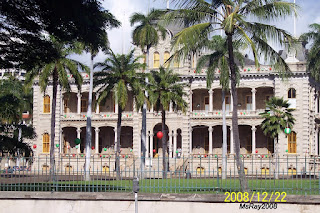 The only official state residence of royalty in the United States of America, 'Iolani Palace was the official residence of Hawai'ian kingdom's last two monarchs, King Kalakaua, who built the palace in 1882, and his sister and successor, Queen Lili 'uokalani.

'Io is a Hawai'ian hawk, a bird that flies higher than the other birds, and lani denotes heavenly, royal, or exalted. The old palace was demolished in 1874 but the name 'Iolani Palace was retained for the building that stands today.

Though its grandeur was neglected after the overthrow of the monarchy, restoration began in the 1970s through efforts of concerned individuals. Restoration and preservation continues, and, as a result, today's visitors to this National Historic Landmark in downtown Honolulu enjoy one of the most precise historic restorations and learn much about Hawaiian history and heritage.
Posted by MsRay