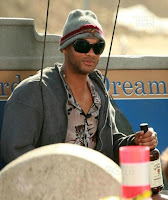 One of the recent action-comedy movies that I like is Hancock, starring the hunkababe Will Smith as the "bad boy" super hero, John Hancock. Smith is sexy in a naughty way in his grunge look (dark glasses, sloppy clothing and beanie).
Although beanies first became popular around the early 20th century when they were used by school boys (between the 1920s up to the early 1940s), they fell out of popularity in favor of the cotton visored baseball caps. However, in the early 1990s, the beanie became in style again due to the popularity of the "grunge" trend.

Celebrities like Enrique Iglesias and a number of rap music artists are known to be beanie wearers. The modern beanie is usually made of fleece or a special synthetic material that whisks moisture away. Woven versions, which look like tobogganing caps, are also popular sportswear accessories for winter and cold weather sports like snowboarding.

Beanies come in different colors and styles and are popular both among young men and women.
Posted by MsRay

Email ThisBlogThis!Share to TwitterShare to FacebookShare to Pinterest
Labels: Beauty and Fashion, Shopping

Hi! Care to x-link? I have added you already in my list. Have a nice day! http://carlos-ideas.blogspot.com