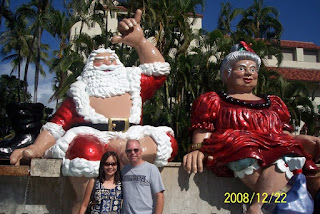 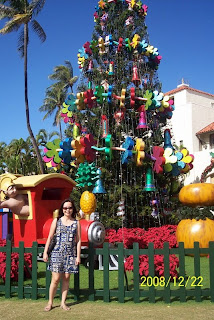 In Hawai'i we say, "Mele Kalikimaka".
The Hawaiian language does not include the letter "R" found in the English alphabet; thus, "Merry Christmas" when pronounced using the Hawaiian language syllables becomes "Mele Kalikimaka".
Another historic site in Hawaii (also listed in the U.S. National Register of Historic Places) is Honolulu Hale (Hale means 'home'), which is the official seat of government of the City and County of Honolulu.  It also houses the chambers of the Mayor of Honolulu and the Honolulu City Council. Located at South King Street, Honolulu Hale is surrounded by other prominent historic and artistic Hawai'i landmarks such as the Ali'iolani Hale (housing the Supreme Court and the Judicial History Center), Hawai'i State Capitol, Iolani Palace, Kawaiha'o Church and the Territorial Building. 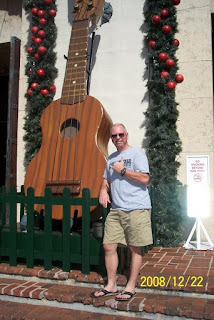 A Honolulu treasured Christmas tradition is the Honolulu City Lights, a month-long event which includes the lighting of a 50-foot Christmas tree in front of Honolulu Hale.  The tree connects lighted Christmas trees and buildings through Chinatown, downtown Honolulu, the Capitol District and the civic center area.
Of particular interest is the 21-foot Shaka Santa, who sits cooling his toes in the City Hall fountain, beside Mrs. Claus.
Posted by MsRay