Today, November 4, 2008, Americans troop to the polls to cast their vote on what is considered a historic election.  Tomorrow, after the results shall have been counted, the United States of America will either have its first oldest president elected in his first term (and first female vice president) or its first Afro-American president.

This is my first time to experience a major election in the U.S.  Election time here (or at least in Hawaii where I live) is not as 'festive' compared to election time in  the Philippines where it is considered a major holiday. Offices of the City and County of Honolulu and the State of Hawaii are closed but it is still a regular working day for Federal offices and private establishments, although employers are required to give their workers a two-hour break so that they can cast their ballots.
In the Philippines, the whole election period is filled with excitement and activity: candidates holding 'miting de avance', posters, flyers and what-nots everywhere, and sample ballots on the eve and even during election day.  In my part of the U.S., I only see a couple of campaign posters hanging on fences.  What I find kind of funny is the sight of persons standing on sidewalks waving to motorists while holding placards with the names of their candidates.  Can they be considered traffic hazards? 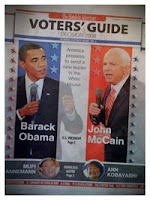 In the Philippines, I am inclined to think that people vote more on personalities rather than on issues the candidates stand for.  Why? Because in my home country, we do not put emphasis on debates.  In the U.S., both presidential and vice-presidential candidates have debates to allow the electorate to at least know where the candidates stand on the issues that affect the country.
In the U.S., freebies are given to voters after they're done with their obligation.  Starbucks give free coffee, Ben and Jerry's give free ice cream.  In Today's Show, Hoda and Cathy Lee said that voters will be given "The Scoop" for free.  In the Philippines, some voters get freebies, too, that is, "grease money" on the eve of the elections.  Don't ask me to elaborate about it. My lips are sealed.
Today is a school holiday so I am just at home doing my chores while following election news on t.v.  and awaiting history in the making.
Posted by MsRay

Email ThisBlogThis!Share to TwitterShare to FacebookShare to Pinterest
Labels: Politics and Government