In one of my bloghops, I came across Life, Review, and Travel. It has a lot of good reads but what particularly caught my attention was the author's post on Filipino sex trade. 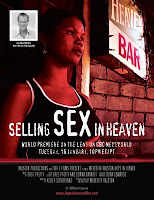 I was especially struck by the documentary on the plight of the sex workers in Angeles City, Pampanga. Angeles City, in Central Luzon, Philippines, was the former home of Clark Air Base, the largest U.S. Air Force Base outside of the continental United States. The city was significantly affected by the closure of the base in 1991, as the economy of Angeles City was heavily dependent upon the US base at that time.

"Selling Sex in Heaven" opens our eyes to the miserable life of Filipino prostitutes, particularly the sex slaves in Angeles City. I was crying after watching the 50-minute video. My heart goes out to my countrymen who are trapped in such a miserable situation. What can an ordinary person, like myself, do to help these people?

Link to : "Selling Sex in Heaven"