Reflections of a Foreigner 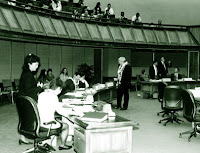 Last Tuesday, our Law 101 (Hawai'i Legal System) class participated in a "mini-legislature" exercise. The activity enabled us to learn "hands-on" how bills were being enacted in Hawaii Congress. We were divided into four groups (two Senate committees and two House of Representative committees) and we held hearings on two anti-smoking bills; after which, we discussed among our group the passage of the bills.

I arrived in the U.S. a little over a year ago and I am still acclimating myself to my new home. School, by itself, is a new experience because it is different from what I was accustomed to in my home country. Over here, there is more student participation and class interaction.

Unlike the rest of my classmates who are already familiar with the US and the Hawaii State constitutions and the US structure of government, almost everything is new to me. Nevertheless, I enjoy learning about the US and Hawaii Constitutions and discovering similarities and differences between the US (and Hawaii) and my country's governmental system.

The mini-legislature exercise was a "first" for me. I have read about how laws are enacted and have watched snippets of committee hearings on t.v. but "experiencing" it gave me a better and clearer understanding about the legislative process. It is true that experience is the best teacher.

I commend Professor Jaworowski for the activity. The testifiers (we even had a real Congressman who played the role of a resident of a government housing project) and the committee members played their roles very well. I can even say that our group did well on the way we acted upon the bills, given the limited time and data. We do make good legislators. LOL!