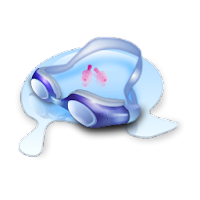 A couple of weeks ago, my hubby began giving me swimming lessons, starting with proper breathing while doing the freestyle stroke. He is a good teacher because in less than a week, I was able to swim a lap in the 25-meter pool. Back in college, we had swimming lessons as part of our Physical Ed class and I passed it by faking my freestyle breathing during the tests. However, I was able to learn in 5 days from my hubby what I failed to learn in 2 months from my PE instructor. It also helped a lot that I trusted my husband and followed his instructions to a T. My hubby said I am the 501st person that he's taught. Back in his younger days in New York, he was a lifeguard and also taught swimming to kids.

I like lap swimming with my husband. Not only do I get the benefits of a good exercise (swimming builds cardio-vascular fitness and burn calories), but the fun part is that we get to spend time with each other while doing something we both enjoy. My husband is my swimming hero!

On the second day we went to the clubhouse, I had with me the August 4, 2008 issue of Time Magazine featuring on it's cover a lady in swimsuit named Dara Torres. I had no idea then who she was but one thing that struck me about her was her sharply cut abs. When I later re 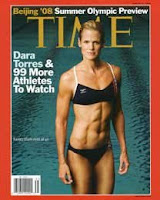 ad that at the age of 41 (and a mother of a 2 year old), she is stronger and can swim faster than she was 20 years ago (she's a nine-time Olympic medalist in swimming), I cannot help but admire! Now, whenever I am at the pool doing my laps I imagine myself having the body (and especially the abs) of that remarkable 41-year old, Dara Torres. It's a motivation! LOL!