I am one of those who caught the Beijing Olympics fever. I am not a TV person but these past few days, I am glued to NBC and following Today show to catch updates on the events. I particularly like the women's beach volleyball and the women's gymnastics.
Watching 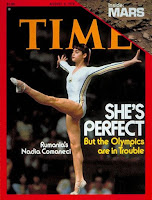 the girls remind me of THE Nadia Comaneci, Romania's Olympic gymnast who was the darling of the 1976 Montreal Olympics. For those of us who were old enough to remember the 1976 Montreal Olympics (I was in grade school when she became a hit around the world), Nadia was the first Olympic gymnast to score a perfect 10. The 14-year old gymnast scored not only one- but seven perfect 10's. She got 3 golds and 1 silver in the Montreal Games in 1976 and four years later in the 1980 Moscow Olympics, she won another 2 gold and 2 silver medals.

And who can forget "Nadia's Theme" ? Whenever I hear that piano music being played, the image of that pony-tailed long-legged girl who seldom smiled comes to mind. There are still footages of her 1976 Olympic winning moments on YouTube so I suggest you check it out and see for yourself why she's a perfect 10.

I saw a glimpse of her being interviewed on Today show with her husband, Bart Conner, a US gold medalist in gymnastics in the LA Olympics. She's no longer the cute Nadia three decades ago but remains a Gymnastics legend.