"The Filipino Is Worth Dying For"

Today, twenty-five years ago, Sen. Benigno "Ninoy" Aquino, Jr., a Filipino statesman, opposition leader, was assassinated at the tarmac of the Manila International Airport (now named the Ninoy Aquino International Airport). Although the court ruled that one of the guards who escorted him down the plane was responsible for the dastardly act, theories of conspiracy still remain involving the dictatorship of the late Ferdinand Marcos, ousted President of the Republic of the Philippines. 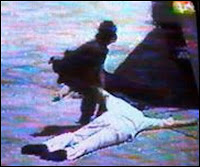 Aquino, a staunch opposition leader during the Marcos regime, was one of the first political leaders imprisoned when Martial Law was declared by the Philippine president on September 21, 1972. He was charged with subversion and was sentenced to death by the so-called "kangaroo court". His death sentence was later commuted and he was allowed to leave for the U.S. to seek medical treatment. His return to the country brought him to his untimely demise.

His death later led to People Power in 1986, where millions of unarmed Filipinos non-violently overthrew the dictatorship of Ferdinand Marcos. The bloodless revolution catapulted Ninoy's widow, Corazon Aquino to the presidency, becoming the first woman in Asia to become President. 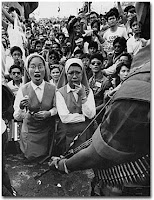 I was a Martial Law baby, but while other girls of my age were preoccupied with fashion and/or boys, after his death, I was joining streets marches, demonstrations and rallies every 21st day of the month until Marcos was ousted from power. I "celebrated" August 21, June 12 (Independence Day) and May 1 (Labor Day) by joini

The Philippines is now free from dictatorship but we still have a long way to go in order to attain freedom. There is still widespread corruption in our government, poverty and economic crisis.

Let us work together to build a better Philippines.
.

It is now time for the regime to decide. Order my immediate execution or set me free" - Sen. Benigno Aquino, Jr.
Posted by MsRay