"I'm Buddy Rich When I Fly Off the Handle"

My other half is passionate about playing the drums. He's been into it since the age of 10. 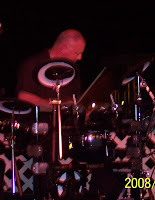 Listening and watching him play, one can really feel the love he has for music, and particularly, playing the drums.


Where were you born, raised and your earliest musical memories?
"I was born in the Park Slope section of Brooklyn, NY and went to St. Savior’s Catholic School. After I completed third grade, my family moved to Staten Island, NY. While in fourth grade, I took piano lessons for a very short time and then took guitar lessons also for just a short time. "

What led you to choose the drum as the instrument of choice?
"In fifth grade, I believe I was 10 years old, I became interested in playing the drums largely influenced by my Uncle Joe, who was also a drummer. I started playing on telephone books and store catalogs. I got my first drum set when I was in the 8th grade after banging on those telephone books for nearly three years."

What music were you listening to when you first started playing?
"I enjoyed the music of Chicago, Blood Sweat and Tears, Herb Alpert, Sergio Mendez, and especially Buddy Rich. I also enjoyed playing along with pre-recorded music of the Rock and Roll bands of the time which are now considered oldies music. "

Who was your first teacher? And what did you learn from him?
"My first formal drum teacher was a man whose name is Mike Sgroi. He was a friend of a friend and he agreed to take me on as a student. The price of my drum lessons was a grand total of $4.00 for a half hour lesson, and he came to my house to give me my lesson which was cool. One of my most favorite stories about Mike was when I was about 13 years old and it was obvious to him that I had not been practicing. He got permission from my mother to bring me to his next lesson. He introduced me to some 10 year old kid and I listened to him play his rudiments absolutely flawlessly, and then played music in a drum book. Then he played his music assignment, which was a really complicated song by the Buddy Rich Big Band. I just couldn’t believe my ears or my eyes. This 10 year old kid was truly gifted beyond belief. He grew up as Tony Pero, and was the drummer for the rock group, “Twisted Sister," which is the group that made the song, "We're Not Gonna Take It."

What is your favorite type of music? Favorite artists?
"I have more than one favorite type of music, among them are jazz, classic rock especially with a brass section, and contemporary country. Hands down, my favorite drummer has always been Buddy Rich. He truly stood alone and was a pioneer for modern day drumming.
I also like the music of Neil Diamond and Billy Joel, Phil Collins and too many others to name."
Did you perform in a band?
"Yes, I began playing in a band as soon as I got my first drum set, which was a white Pearl kit made by Zim Gar. I played with two guitarists, Tommy Schaefer and Roy Simmons. We practiced mostly at my house down my basement. They were both pretty good guitarists and were serious about music. Roy became a guitar teacher, and unfortunately, Tommy passed away right after our sophmore year of high school. Roy became a guitar teacher, and unfortunately, Tommy passed away right after our sophomore year of high school. Later on when I was in high school, I played drums for various school plays and other productions. I also hooked up with a guy named John Frezzo who played excellent cordavox. The really great thing about John was that he was already playing solo gigs when he asked me to join him. From there, our performances were our best calling cards. That gravy train ended when I went away to college to major in Criminal Justice at Westfield State College in Westfield, MA. Basically, my musical performance days were over for many years as I embarked on a career journey as a trooper with the Maine State Police and then as a special agent with the Naval Criminal Investigative Service (N.C.I.S.)." 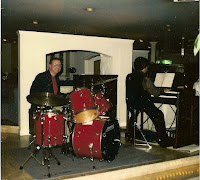 "Musically, things picked up again after N.C.I.S. relaxed its “no-outside-employment” policy. Eventually, I was transferred to Japan and it was there that I was fortunate enough to play with Japanese jazz, oldies, and country & western bands. I was gigging in Japan for four years during 1996 – 1999 until I moved back to the U.S. to the Washington, DC area. When I got to the U.S., I took a break from performing publicly."
How often do you practice now and for how long?
"Since I've been playing for over 40 years, nowadays, my practice sessions are frequent short periods mostly for personal enjoyment. I do practice at least once a week for three hours per session with the band I am currently drumming with."

Do you have any tips or tricks for enjoying practice time?
"Learning a new beat or new song or anything at all for that matter comes down to taking baby steps. When you look at a complicated rhythm as a whole, it may seem extremely difficult, but if you take it one measure at a time, and slow it down, it isn’t nearly as difficult to learn. Don’t get discouraged and always remember that the highest mountains are all climbed one small step at a time. There’s a lot of enjoyment from the feeling of accomplishment when you master something new. "
Tell us about your present band, “Inspirations”. What type of music does your band play?
"We are an oldies band with some original music. Our band members are lead, rhythm, and bass guitarists who all add vocals, a lead singer, and me on drums.

We’re in the process of searching for a keyboardist to help us with our growing repertoire. We’ve been fortunate to be gigging at least two to three times a month and we have dedicated rehearsals at my house at least once a week for three hours. The guys in the band are just terrific musicians and great guys. I’m really lucky that I was asked to join this group.
.
Oh, by the way, I'm really lucky to have a dedicated roadie who is my wife, Rayri. "
.
Posted by MsRay